Hey kiddies! Happy almost Wednesday! I hope all is going well in your week so far. I’m looking forward to warm days ahead!! Here’s a little rhyme for you to get you through the rest of the week! Love and feathers, Auntie Goose 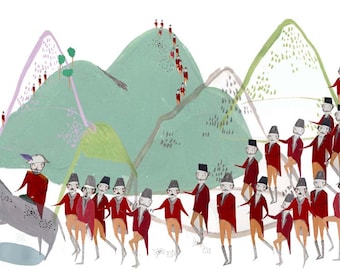 Origins of the Rhyme
The words of the Nursery rhyme are believed to refer to Richard, Duke of York, claimant to the English throne and Protector of England and the Battle of Wakefield on December 30, 1460. The Duke of York and his army marched to his castle at Sandal where Richard took up a defensive position against the Lancastrian army. Sandal Castle was built on top of the site of an old Norman motte and bailey fortress. Its massive earthworks stood 33 feet (10m) above the original ground level (“he marched them up to the top of the hill”). In a moment of madness he left his stronghold in the castle and went down to make a direct attack on the Lancastrians ” he marched them down again”. His army was overwhelmed and Richard the Duke of York was killed. A similar Nursery rhyme is The King of France went up the hill.

The current Duke of York

6 thoughts on “The Grand Old Duke of York”